I have permanently installed both a Valentine One and an Escort Passport 9500ci in my C6 Corvette. Why both? While the 9500ci is a great detector, it lacks the V1's directional arrows. As anyone who has gotten used to having the arrows can attest, I have come to depend on them and feel lost without them. The V1 is also more responsive to received RADAR signals, especially "quick trigger" bursts which the Escort can miss completely. The 9500ci offers slightly better RADAR detection range, is undetectable by RADAR detector detectors like the VG-2, and has a customizable database of threat locations such as red light cameras and speed traps. Together they are an unbeatable combination.

The V1 is hardwired to the passenger side headliner using a VoZtech mount. This is the optimal location within the C6 cockpit both in terms of RADAR and LIDAR detection range as well as limiting visibility of the V1 from outside the car. With the V1 display blacked out, it's virtually invisible from outside the car. The V1 itself slides easily out of the mount so I can take it with me when I leave the car. 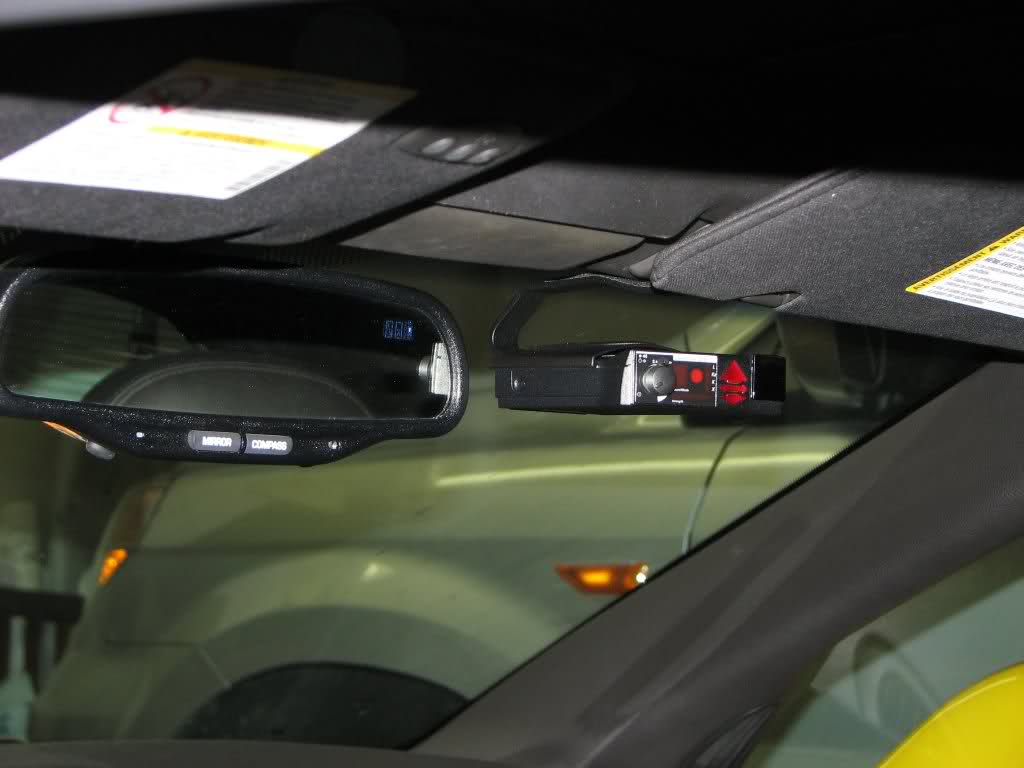 I ran the wire from the HUD One mounting location through the inside of the A-pillar: 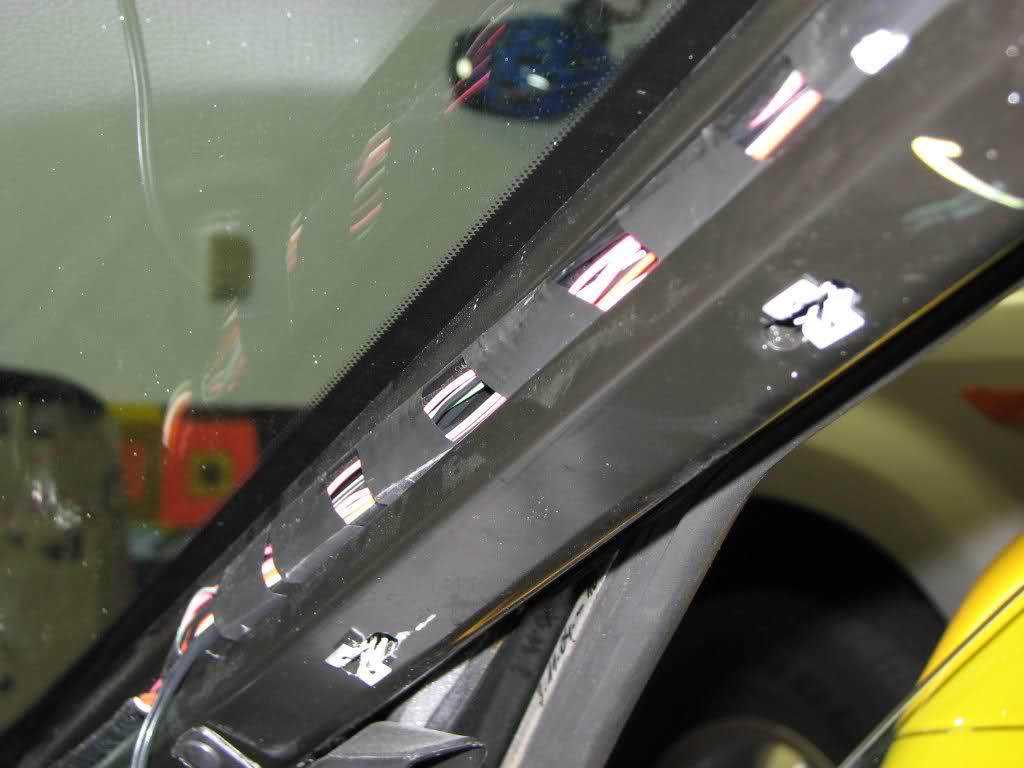 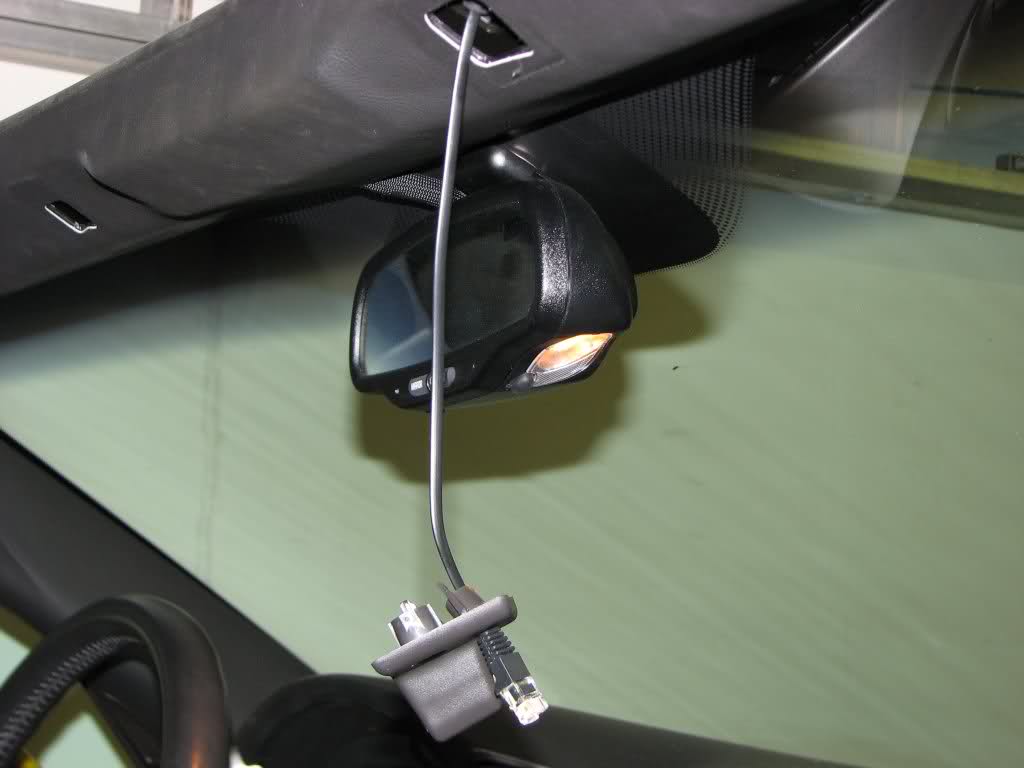 It comes out through a small hole in the bracket which used to house a small yellow "ambient lighting" LED. I saved the LED in case I ever want to restore the car to factory condition - Millennium Yellow C6es are destined to become collector's items. As an aside, although the Voztech is a very nice mount, it does suffer from a rather significant design flaw: the mount is somewhat "springy," and the V1 has a strong tendency to oscillate or bounce on rough roads, making an annoying rattling noise. The small piece of rubber wedged between the "jaws" of the Voztech bracket is a short length of coiled-up bicycle inner-tube; its purpose is to help dampen this oscillation. 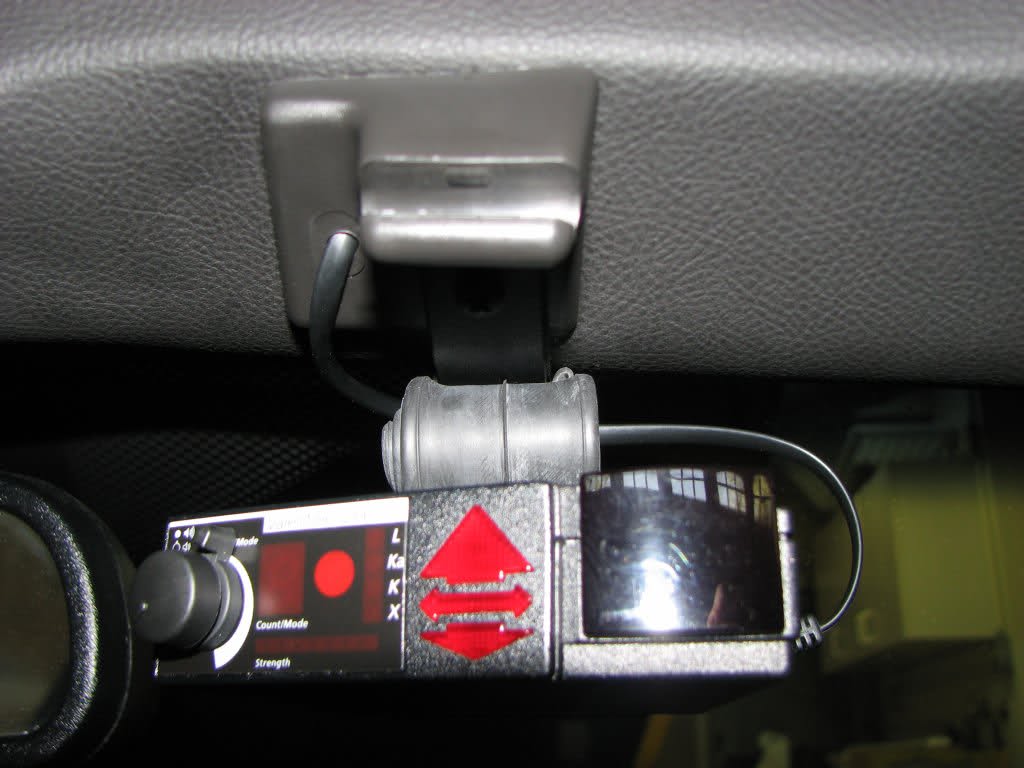 Installing the 9500ci is somewhat more involved than hard-wiring the V1, as there are several components (interface module, control module, speaker, GPS antenna, front and rear LIDAR shifters, and the RADAR antenna) which have to be fitted as seamlessly as possible into the car. The installation of the 9500ci, while challenging in any car, is even more so in the C6.

The first problem was mounting the front LIDAR shifter heads. A popular location for mounting them is just inside the front grille opening, suspended from the bottom of the front bumper cover. The ZR4 shifters are relatively weak to begin with (as compared to other LIDAR jammers such as the Laser Interceptor or Blinder), and thus mounting them absolutely square and level is essential to maximize their effectiveness. The problem is that the underside of the front bumper of the C6 Corvette is not level - the bumper has a slight (~2 degree) upward slope, forming a barely-noticeable "V" shape: 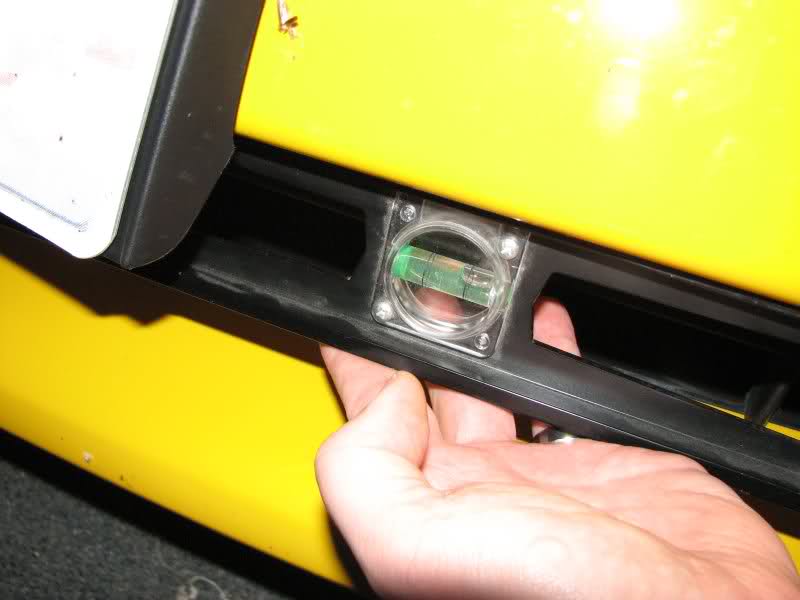 2 degrees might not seem like much, but testing of the Escort ZR4 shifters has shown that it's enough to compromise their effectiveness.

So what to do? After much head-scratching and experimenting, I tried some composite shims and found that their slope was just about perfect: 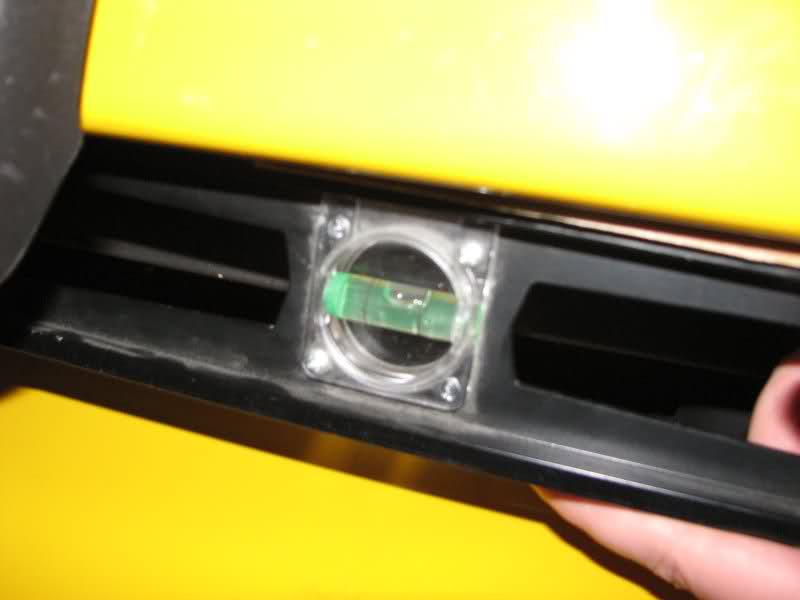 Here are the shims attached to the ZR4 mounting brackets: 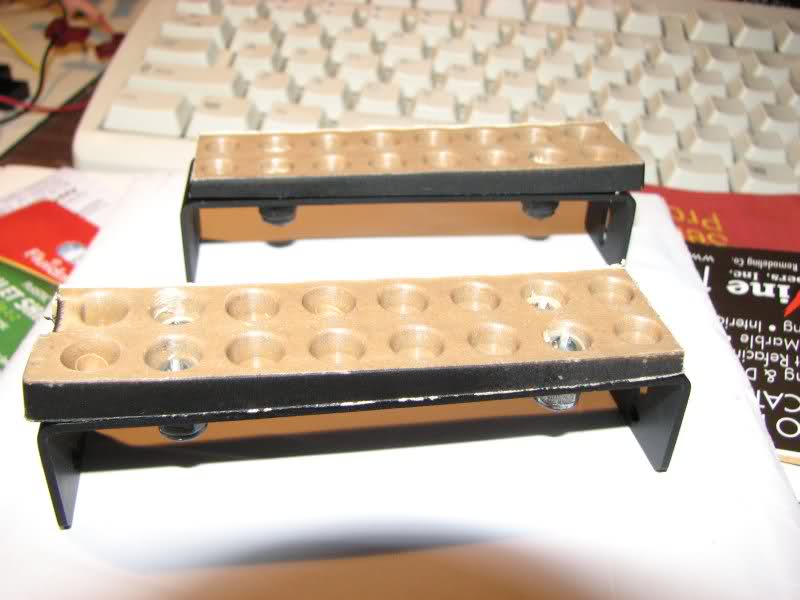 The next problem was the RADAR receiver module. Like the LIDAR shifters, the RADAR antenna needs a clear view of the road ahead. I also wanted to make the installation as stealthy as possible, so placing the antenna back inside the front grille opening seemed like the obvious choice. However, there is a slight drop-off just behind the grille that made this somewhat problematic. The drop is easy to see in this view of the area behind the grille. 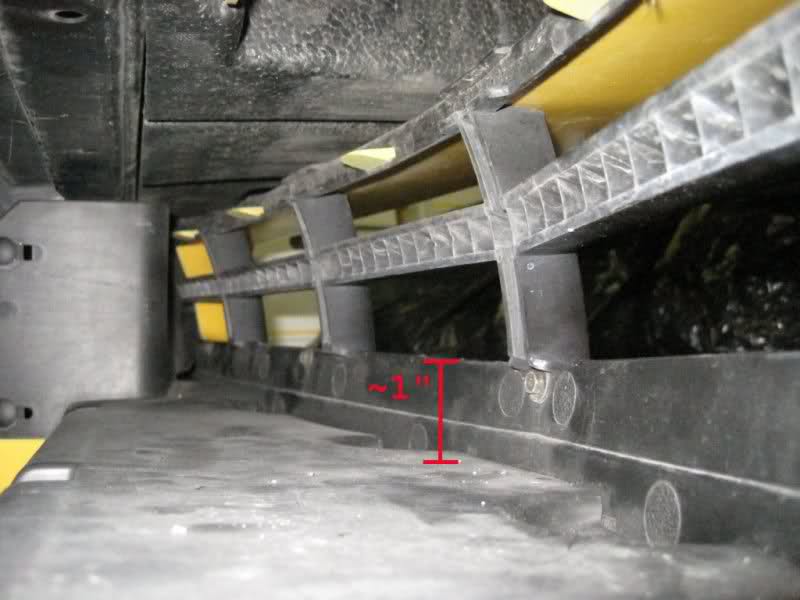 When placed on this "shelf," the front of the RADAR antenna is almost completely blocked by the bumper cover: 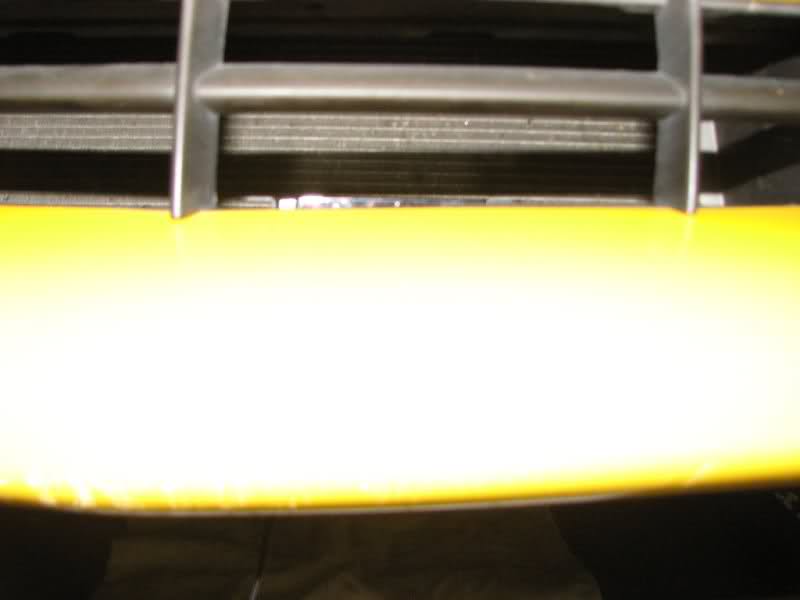 I solved this problem by building a small platform out of aluminum angle stock: 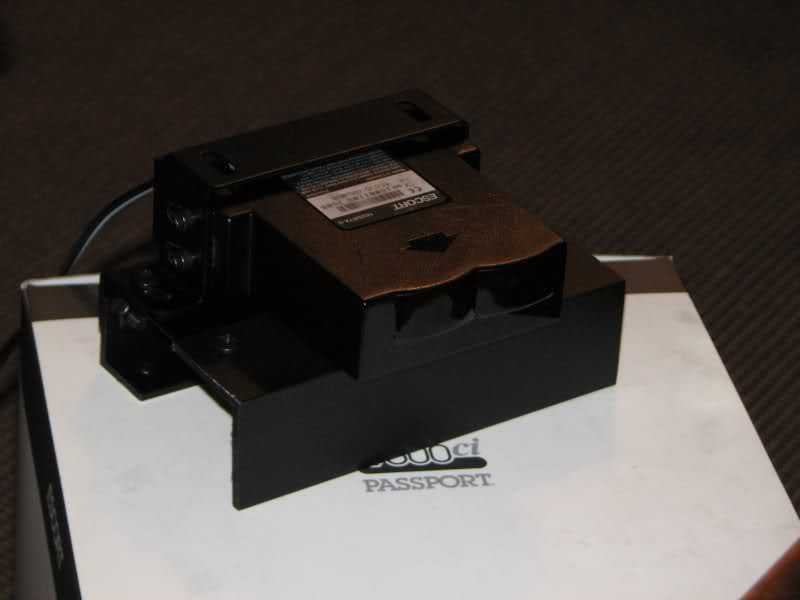 This platform raised the antenna up just enough to clear the plastic pieces.

Once installed, the RADAR receiver is almost impossible to see.

You have to crawl on the ground and look very closely. It's there in the center, just beneath the license plate:

The wiring was routed around the perimeter of the grille area and held in place with anchored zip ties.

Once inside the engine compartment, I enclosed the wiring with plastic wire loom and routed it near the factory wiring harnesses back towards the firewall, taking great care to avoid moving parts like the hood support struts and areas that are likely to get hot like exhaust manifolds. 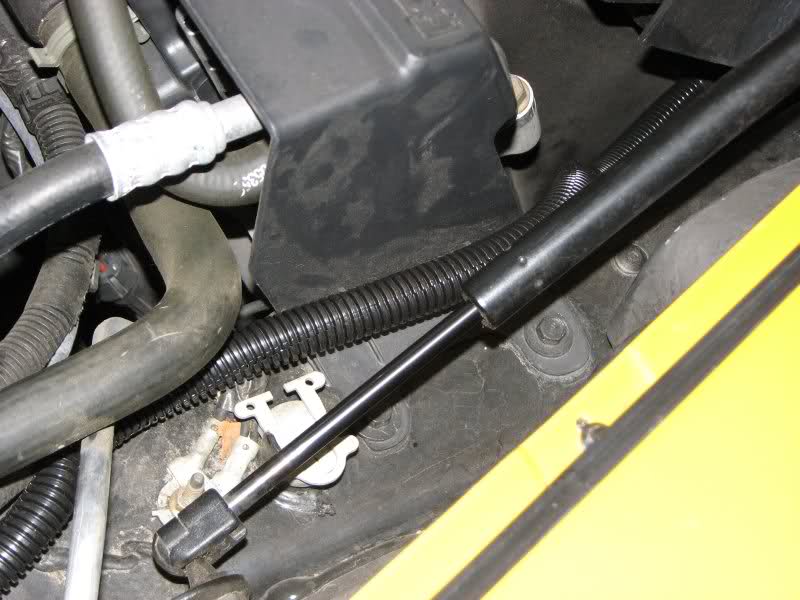 I drilled a small hole through the firewall just behind the battery shelf for the wires to enter the cockpit: 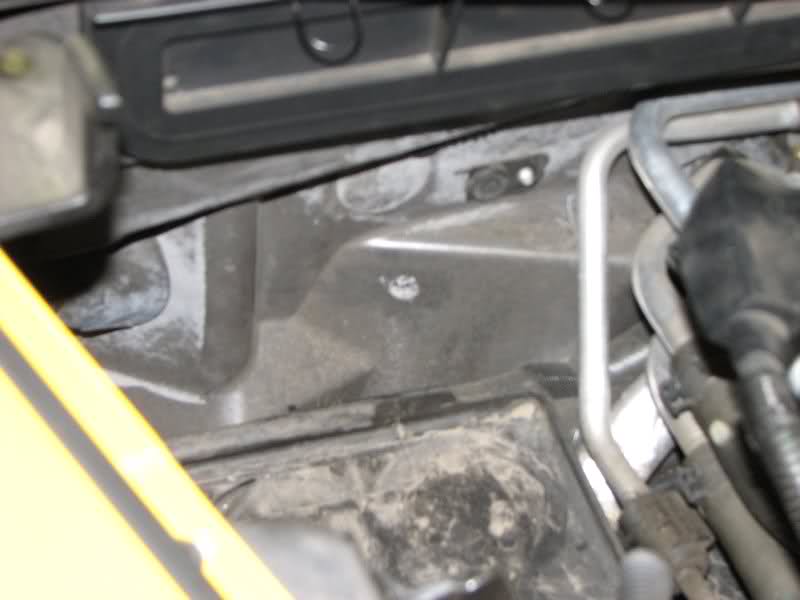 After running the wire under the battery tray and through the hole, the supplied grommet neatly sealed the hole. 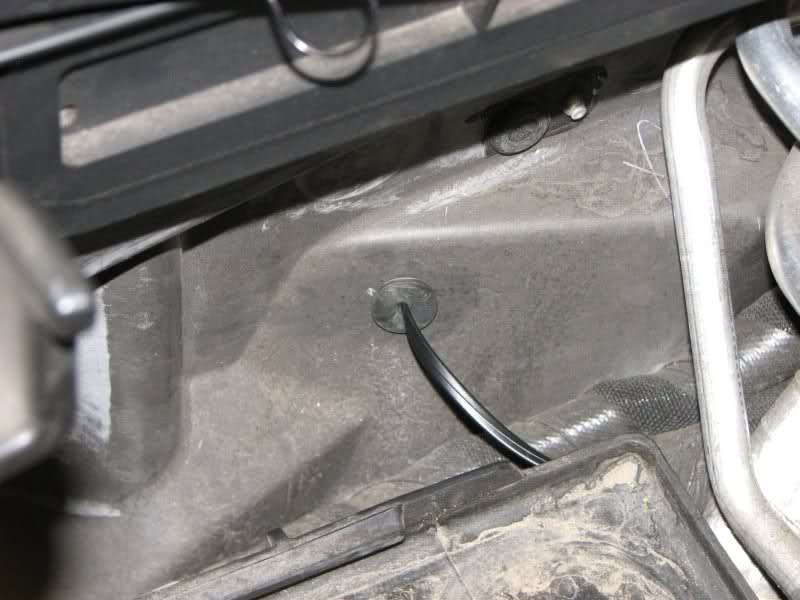 I then completed the wire loom installation. 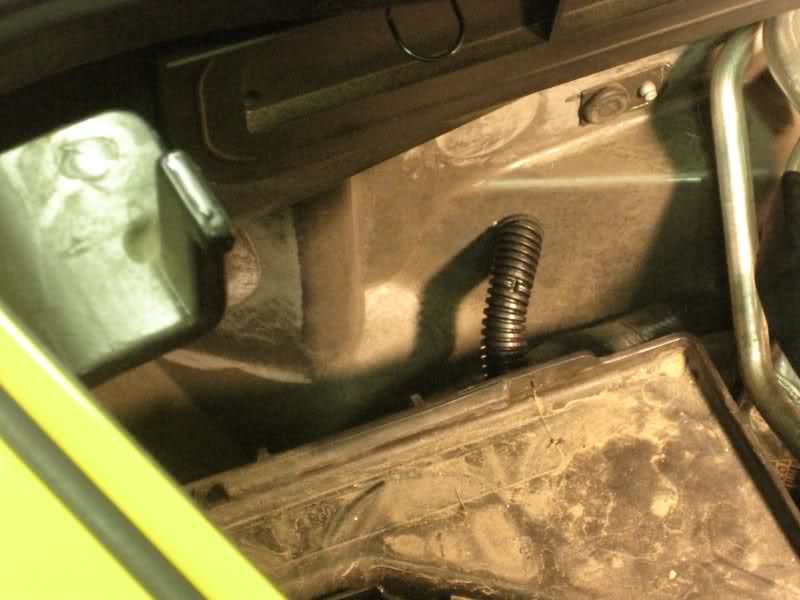 Once encased in the wire loom, the new wiring is virtually indistinguishable from the factory wiring harnesses. 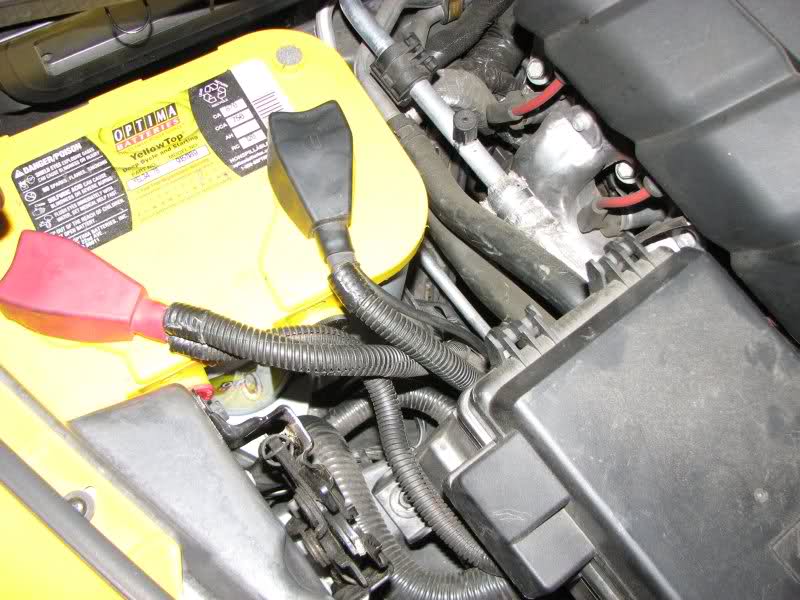 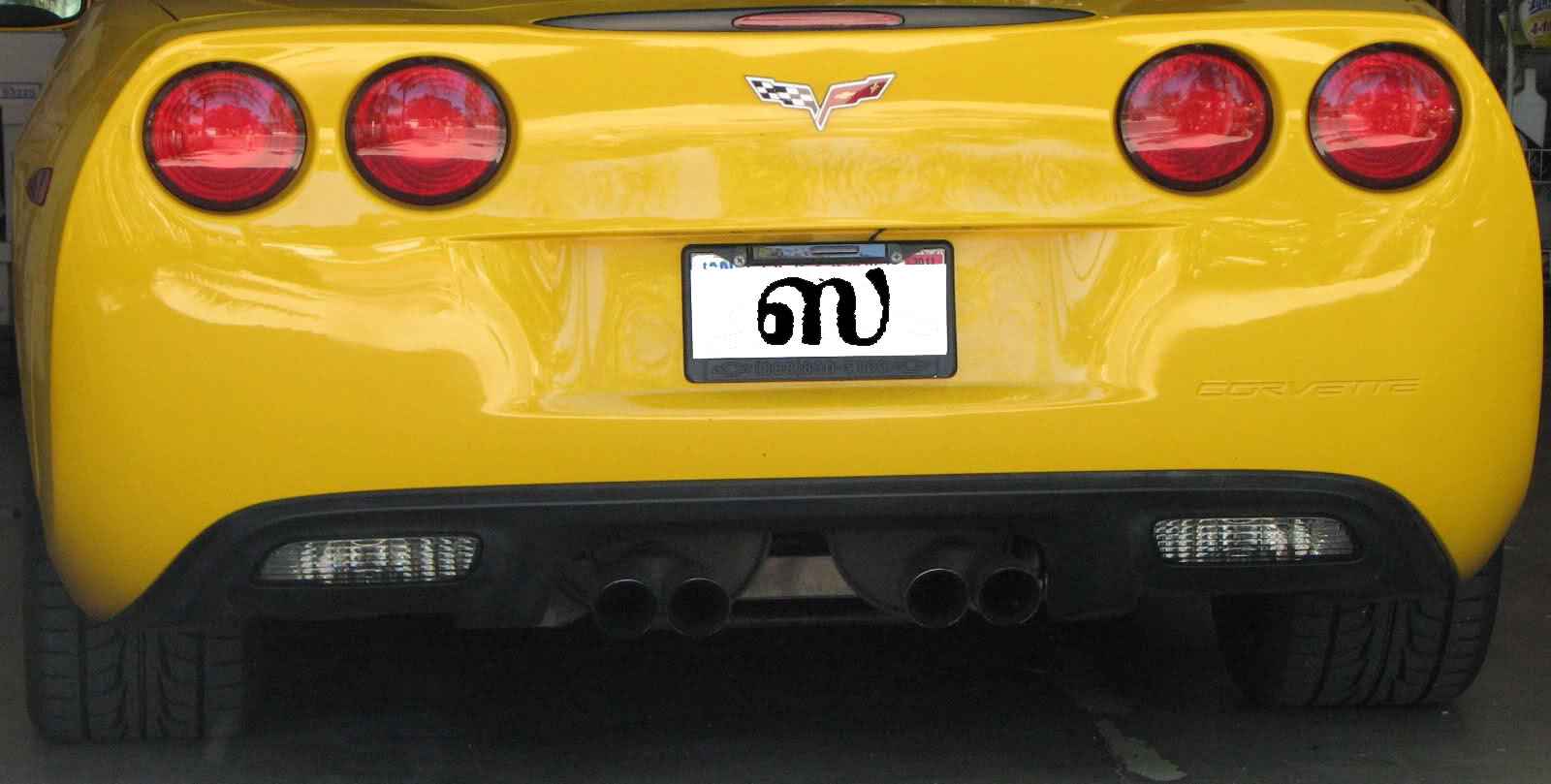 There is a convenient opening just above the license plate where the wire can enter the empty space behind the rear bumper cover. To bring the wire inside the car, I drilled another hole just behind the right taillight. 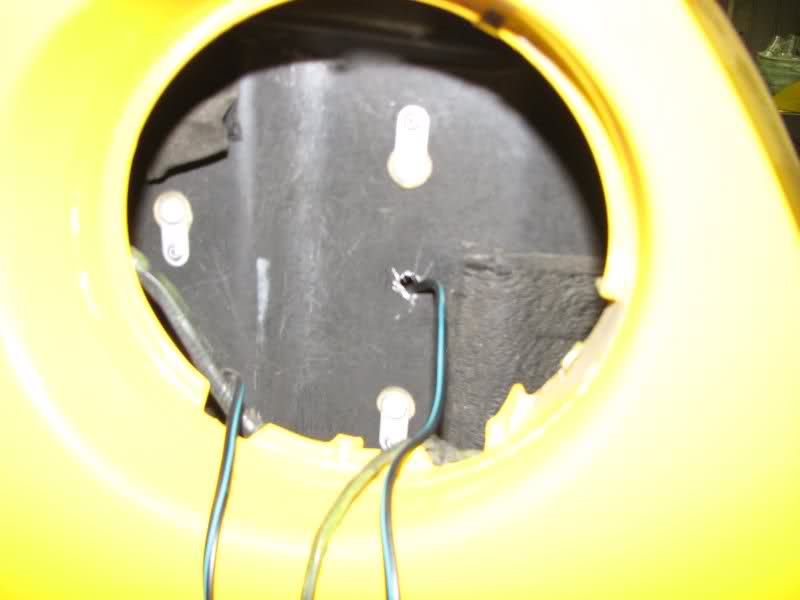 As before, the Escort-supplied grommet was used to seal the hole. 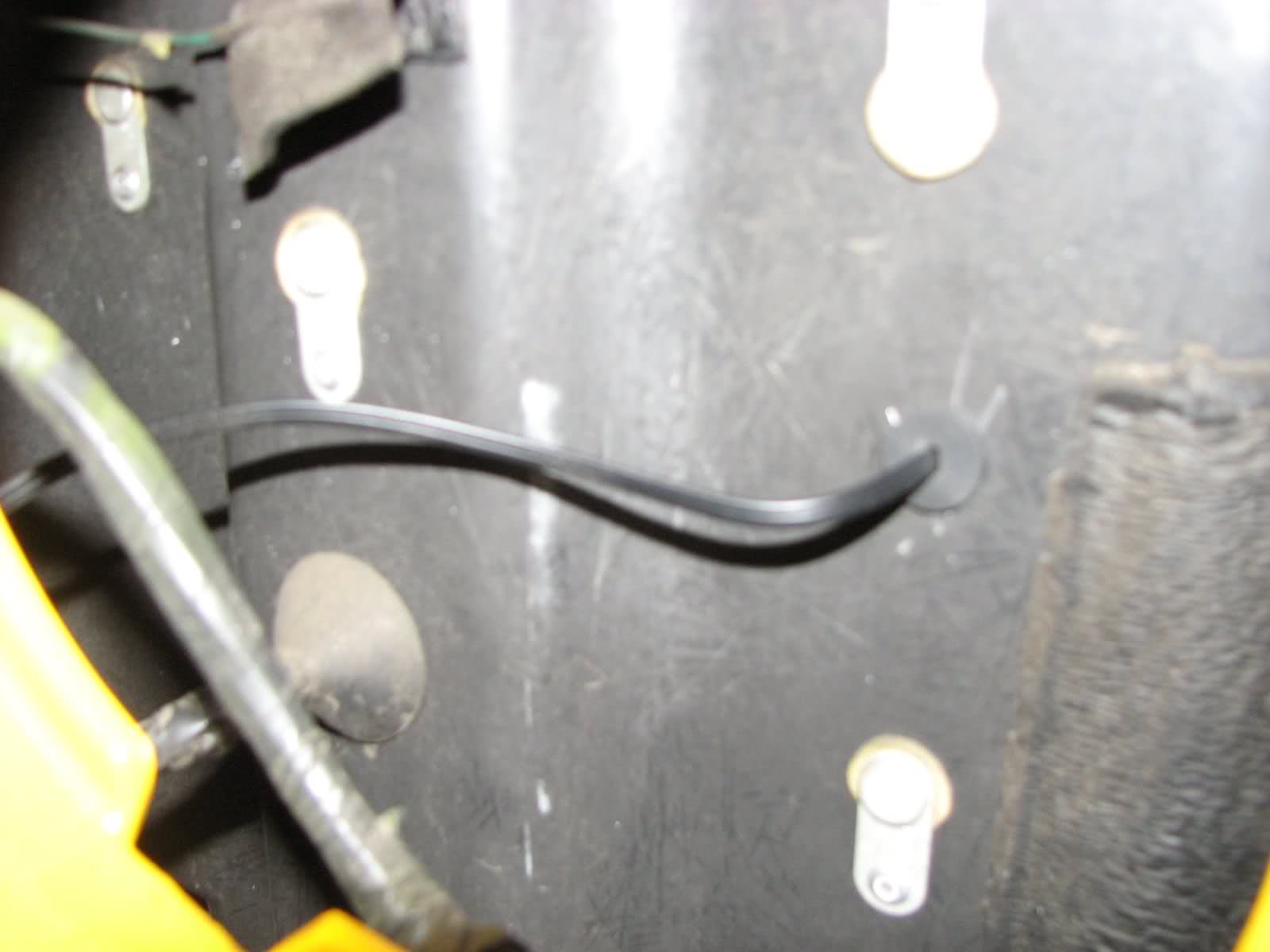 Here is the view from inside the rear hatch area: 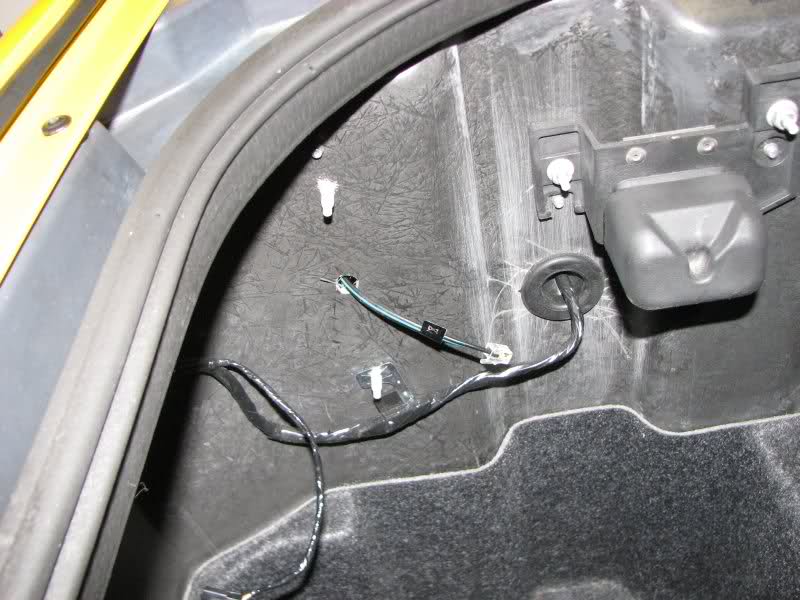 With the hatch area trim pieces removed, I also installed the GPS receiver on top of the driver's side rear wheel well, attached with double-sided tape: 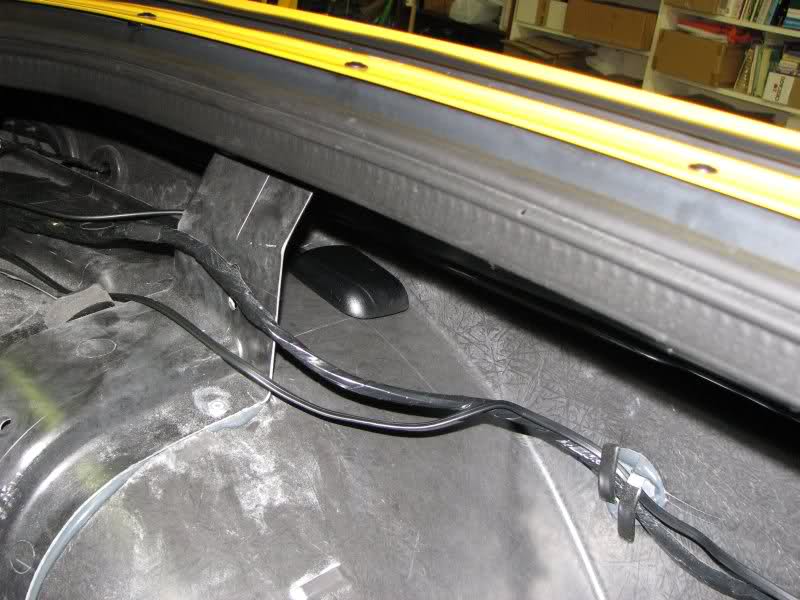 Although there is a plastic body panel above it, GPS reception is not significantly impaired, and I never have a problem getting a signal lock.

Working my way forward, I removed the interior trim pieces along the passenger side and routed the shifter and GPS wires forward to the passenger side footwell area. In the process, I somehow managed to destroy and/or lose a couple of the little plastic pins that hold the trim pieces on; fortunately, a quick trip to the local Pep Boys resulted in suitable (though expensive) replacements.

The 9500ci's speaker was mounted above the passenger side "hush panel." Fortunately, it doesn't hush the sound from the speaker very much, and the warnings are still clearly audible anywhere inside the cockpit.

My current plan is to mount the 9500ci's control module behind the ashtray panel, similar to this install in an Audi R8: 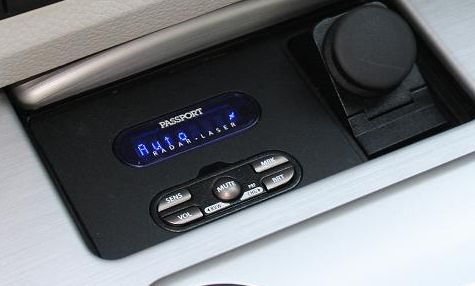 With the auxiliary mute button installed within easy reach in my center console, there's no need to access the control module on a regular basis; thus, it can remain hidden away behind the ashtray panel when not in actual use. However, because of the fabrication skills required to do this well and have it look good, I haven't gotten around to this part of the install as of this writing.


Tying it all together, the 9500ci interface module is installed behind the passenger side footwell panel in the space beneath the Bose amplifier. All of the wiring discussed thus far converges in this area, which also contains the fuse panel. 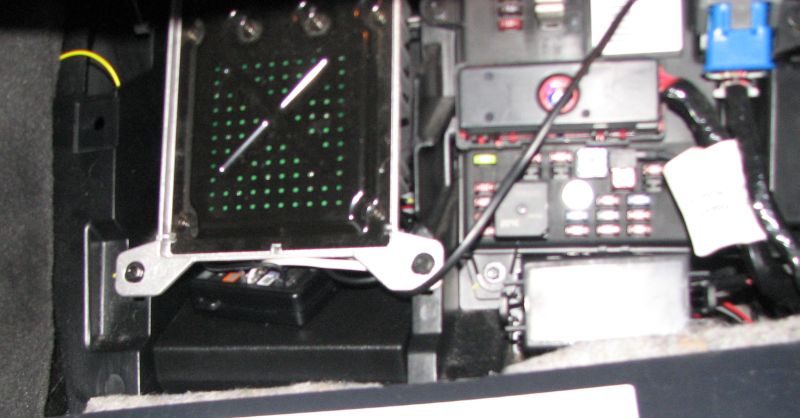 Because the display from both RADAR detectors is projected on my windshield by the C6 HUD, I didn't install the 9500ci Display Module. While it should be possible to install both the Display Module and the HUD One simultaneously through the use of a splitter, the HUD One's display is so superior I never felt the need.


The HUD One main board fits into a Serpac 051 or 151 enclosure. This enclosure was chosen specifically to fit into the cozy little spot underneath the passenger side floorboard, next to the fuse panel and the amp for the stereo. There is just barely enough room in this space for both the 9500ci Interface Module and the HUD One.

I installed the HUD One's mute button in the "tombstone" panel in my center console. If a LEO hits you with a burst of instant-on RADAR or a LIDAR gun and sees you immediately reach up to your headliner to press the mute button, it's a dead giveaway that you have a RADAR detector in your car. Mounting the mute button here puts it within easy reach when needed, and it can be pressed without any moves that are visible from outside the car. Both the mute button on the V1 and on the 9500ci Control Module remain fully functional as well. The three large cables coming out of the front of the tombstone are the USB and HDMI cables for my AVIC-8000NEX installation. 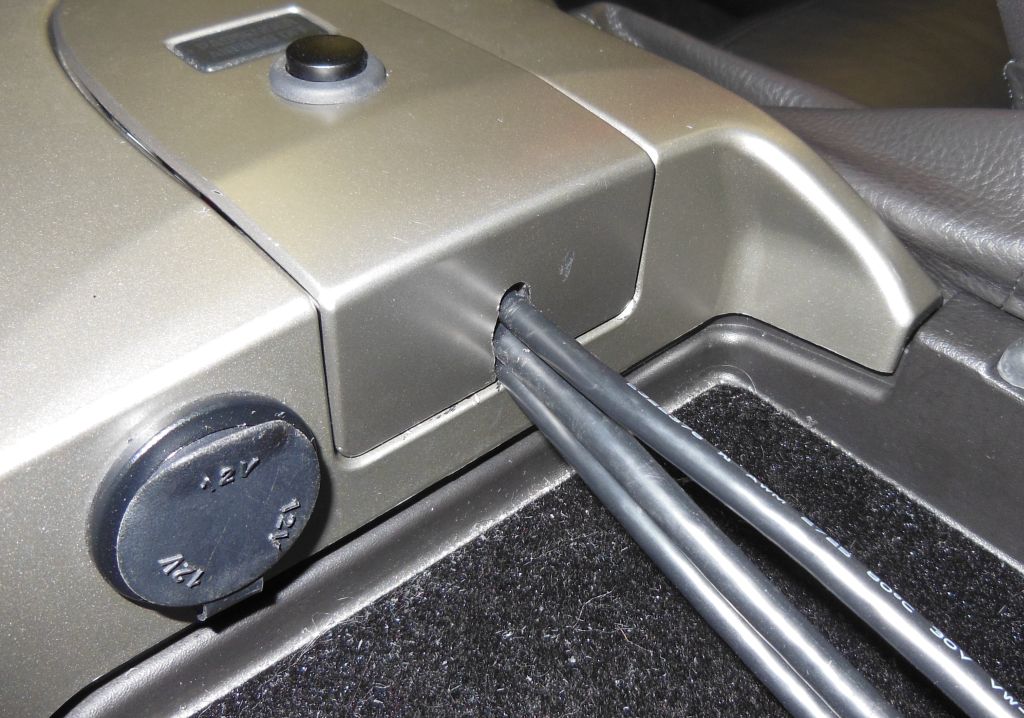