Can You Spot My Concealed Display?

Somewhere in the interior of this C6 Corvette is a concealed display for a Valentine One RADAR locator. It's in plain sight in the photograph below. Can you find it? 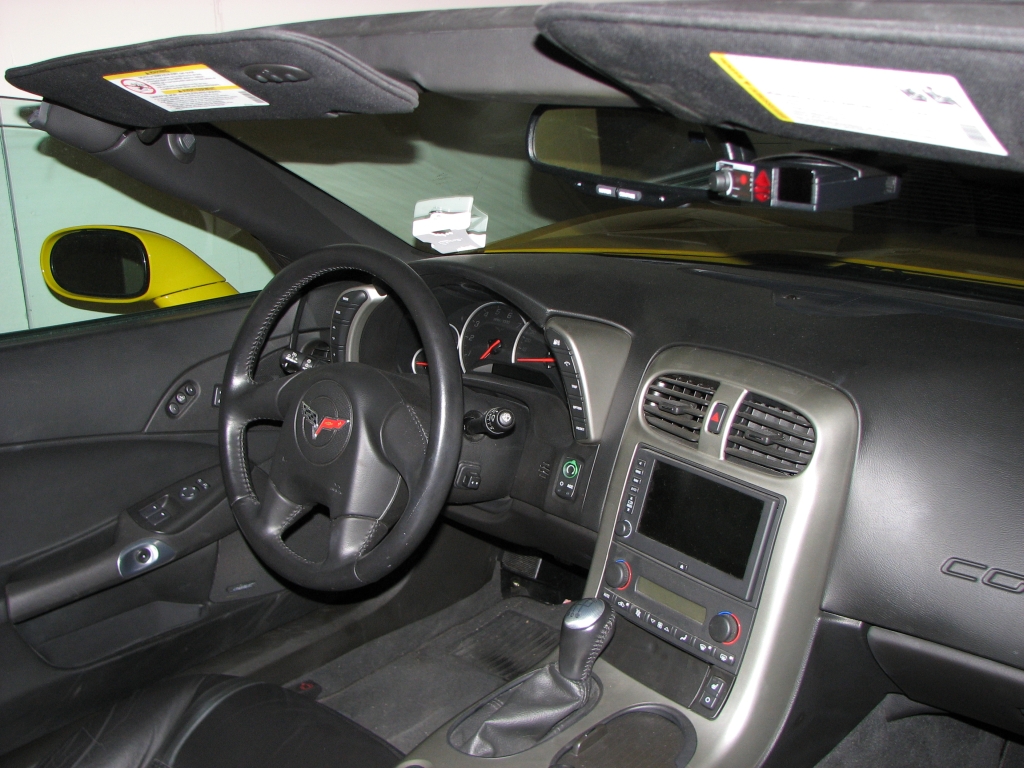 Give up? The RADAR detector display is projected onto the windshield using the stock C6 Head-Up Display (HUD):

This is made possible thanks to a "little black box" I designed called the HUD One (read more about the development here). The HUD One is an interface between the Concealed Display jack on a Valentine One and the Class 2 communication bus in my Corvette. It translates status indications from the V1 into the appropriate Class 2 bus messages, causing the threat status to appear on the C6 HUD. To accomplish this, the HUD One overloads several of the icons and other display features from the C6 HUD's navigation function to display the threat information. For example, the arrow icons are used to indicate threat direction, the distance bar is used to indicate signal signal strength, and the distance indicator doubles as a bogey counter.

So why is this a big deal? In addition to the sheer coolness factor, having a truly concealed display serves a very practical purpose: it conceals the fact that I have a RADAR detector installed in my Corvette. Thieves who peer into my car looking for valuables won't see anything (the V1 itself is on a slide mount, and I take it away with me whenever I leave the car). Other drivers who do not have a RADAR detector of their own won't drive in close proximity to my car to leech off of my RADAR detector's warnings. While a RADAR detector can help one avoid tickets, it's not a magic shield. If I ever do get pulled over, hiding my RADAR detector from the Law Enforcement Officer (LEO) who is walking up to your side window is extremely important. Even in areas where RADAR detector use is legal, many LEOs believe that RADAR detector users are sly, habitual offenders; if they see a RD in my car, that warning I was about to receive could be instantly transformed into a ticket. Better safe than sorry!

The HUD One also supports the Escort Passport 9500ci RADAR/LIDAR detector. All display modes and functions are fully supported, including the marked location (red light camera, speed trap, etc.) features via a similar overloading of the C6 HUD's navigation icons. In fact, the HUD One supports both the Valentine One and the 9500ci at the same time, combining the output of both detectors into one coordinated display on the HUD.

Here's a video of the HUD One in action. Note that both the V1 and the 9500ci detectors are reporting a Ka band bogey ahead. The 9500ci display is set to spec mode.

Because the C6 HUD was never designed for use as a RADAR detector display, some compromises had to be made when adapting it. For example, the HUD arrow icons can only indicate a single direction at a time, whereas the V1 can display a front arrow, 2 side arrows, and a rear arrow simultaneously. The V1 indicates the source of the strongest/most important signal with a flashing arrow, so the HUD One's arrow icon corresponds to this flashing arrow whenever the V1 displays more than one arrow simultaneously. Another quirk is the use of the distance indicator as a bogey counter; there is a superfluous "MI" (for "miles") or "KM" (for "kilometers") after the bogey count which cannot be suppressed. Fortunately it doesn't take long for the driver to adapt to these minor nuisances.

In addition to the primary threat direction icon, the all displayed V1 arrows are shown on the status line, with 'F' standing for "Front," 'S' for "Sides," and 'R' for "Rear." This status line also shows the frequency bands of all received signals, with 'X' for X-band, 'K' for K-band, "Ka" for Ka-band, "Ku" for Ku-band (used primarily in Europe), and 'L' for LIDAR.

For the 9500ci, RADAR/LIDAR threat information is displayed on the status line (if both a V1 and a 9500ci are installed, the 9500ci uses the second HUD status line). With minor exceptions, the same characters that would be displayed on the 9500ci's own display will appear on the HUD status line. The exceptions are the "arrow" character (used to indicate direction to a marked location) and the "satellite" character (used to indicate GPS signal status). The HUD One displays the direction to a marked location using the same arrow icons that are used for the V1 directional arrows, whereas the GPS signal status is displayed textually on the status line along with the current mode whenever there is a change.

Have you ever missed an alert from your RADAR detector because your car stereo was turned up too loud? That could be a very costly mistake, so the HUD One automatically mutes the OEM stereo for 4 seconds whenever either detector sounds an alert. This is done by sending the same Class 2 bus commands that the On*Star module sends in order to mute the stereo for an incoming phone call. Since the V1 is somewhat "chatty" when driving in town, the stereo mute feature has a bit of hysteresis: the mute will only be activated for the first alert after 60 or more seconds of no alerts. Note that the mute function only works with C6 factory stereos; the HUD One cannot mute aftermarket stereos.

The HUD One also supports an auxiliary mute button in the form of a SPST momentary push-button switch; mine is mounted in the "tombstone" panel in my center console. When this button is pressed, the HUD One simulates a mute button press on all attached RADAR detectors. This allows a mute button to be mounted in the most convenient, ergonomic place within the cockpit, regardless of where the RADAR detector(s) or their control panel(s) are mounted.

The HUD One also has a USB port. While originally intended for firmware updates, it can also connect the HUD One to an external computer (e.g. a laptop or Car PC). The status of both RADAR detectors as well as the car itself is available to the connected PC in real time. For Car PCs running the RideRunner front-end software, I also developed a proof-of-concept plug-in that puts the threat status on the PC's monitor. Here is a short video of the plug-in in action:

Because the HUD-One is connected to both RADAR detectors and the Class 2 bus, it is capable of relaying all sorts of useful telemetry data to an attached laptop computer. Using software such as RaceRender, vehicle parameters such as speed, engine RPM,lateral acceleration, brake status, temperature, and many others can be overlaid onto a video recording as in the example below.

This last video is a "teaser" introduction to the HUD-One. (NOTE: If the video doesn't play in your browser, click here and select "save as" to download it.)

The HUD One project is complete and fully-functional. Prototypes have been in operation in several C6 Corvettes since 2010. For more information about the HUD-One's development, click here.


All trademarks appearing on this web page are trademarks of their respective owners.